Hingis has doubles win in return to WTA Tour 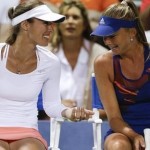 Martina Hingis got a win in her first match in her return to the WTA Tour. She teamed up with Daniela Hantuchova for an impressive 6-1, 6-1 victory over Julia Goerges and Darija Jurak on Wednesday night in the Southern California Open.

Hingis didn’t touch the ball until the fifth point of the match but flashed her doubles talent when she hit a backhand volley right at Jurak for a point in the second game.

“I felt like I got more comfortable (after the first set), returning, serving, everything,” she said. “For me, mentally, I felt really good after that. The (first) service game of the second set, after that game I was like, `I’m back to normal.'”

The five-time Grand Slam singles champion frequently flashed a smile as she and Hantuchova overwhelmed their opponents. The pair hugged after Hingis’ lob shot over Jurak’s head sealed the first-round match.

“It was very special, very emotional,” Hantuchova said. “I was also little bit nervous because obviously I wanted to play my best.”

Hingis is scheduled to play doubles with Hantuchova in four tournaments, including the U.S. Open.

“It was a great test for us and being able to beat them the way we did, it just gives us a lot of hope for the coming weeks,” Hantuchova said about beating the team that reached the final of the Bank of the West Classic on Sunday.

Hingis, a former top-ranked singles player and nine-time Grand Slam doubles champion made her return at 32 years of age. Her last tour match was September 2007.

Hingis has retired twice previously, the first time in early 2003 at 22 and the last time in November 2007.