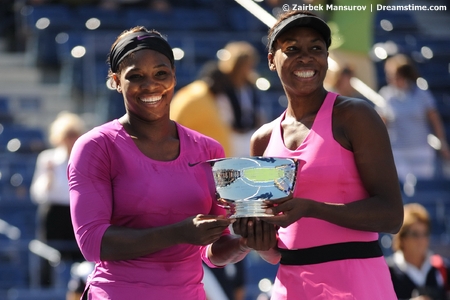 Serena and Venus Williams of the USA will ascend to the top of the doubles rankings next week, the Sony Ericsson WTA Tour announced on Wednesday. Serena will also become the sixth player in Tour history to hold the No. 1 ranking in both singles and doubles simultaneously.

Following their Roland Garros semifinal victory against Liezel Huber and Anabel Medina Garrigues, Serena and Venus will climb to the top of the Sony Ericsson WTA Tour Doubles Rankings (as of June 7, 2010) for the first time in their career. They are currently ranked World No. 1 and 2, respectively, on the Sony Ericsson WTA Tour Singles Rankings, but will be joint doubles No. 1.

“It’s a lifelong dream to be World No.1 in doubles and I am so excited,” said Serena Williams. “To be No.1 in singles and doubles simultaneously is such a great moment, something that I wouldn’t have imagined. It took a lot of hard work and was not easy for us to get to the top and I hope we can hold on to this accomplishment for a long time.”

“It’s an achievement that I never thought would happen. To clinch No. 1 in singles and doubles is an honor and to be able to achieve it in doubles with my sister is just wonderful,” added Venus Williams.

“Serena and Venus Williams are two of the greatest champions in the history of women’s tennis and to be ranked at the very top in both singles and doubles at this stage of their long and celebrated careers is a testament to their talent and commitment to our sport,” said Stacey Allaster, Chairman and CEO of the Sony Ericsson WTA Tour.

Serena and Venus recently collected their 18th Tour doubles title at the 2010 Mutua Madrilena Open (Madrid), extending their finals record to 18-1, which includes 11 Grand Slam victories. Since the start of the 2009 season, the Williams sisters’ doubles team has amassed a 37-2 record (including their semifinal win at Roland Garros), collecting four of the last five Grand Slam doubles titles in addition to the 2009 Bank of the West Classic (Stanford) and the 2010 Mutua Madrilena Open. Their only losses in this period came in the quarterfinals of 2009 Roland Garros and the semifinals of the 2009 Sony Ericsson Championships – Doha 2009. After their semifinal win at Roland Garros, the Williams sisters own a career doubles win-loss record of 144-18 (55-4 since the beginning of 2007)

Serena Williams joins an elite list of players to rank World No.1 in singles and doubles simultaneously, the others being Martina Navratilova, Arantxa Sanchez-Vicario, Martina Hingis, Lindsay Davenport and Kim Clijsters.