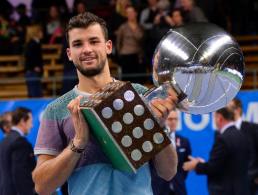 Although Grigor Dimitrov has been called “Baby Fed” for some years, and was considered a promising junior having won two junior Slam titles (Wimbledon and US Open) back in 2008, his pro career has only really taken off since 2012.  Up until then, he was struggling, like many pros, to play up to his moniker.  Indeed, he was rarely in the main draw, often playing Challengers or attempting to qualify for the Slams.

Still, with 2 years on tour, he had not made his initial breakthrough which was winning a title.  Earlier this year, he made the finals of Brisbane which he lost to Andy Murray.  His challenge at Stockholm seemed no less daunting with the ever consistent David Ferrer as his opponent.

However, Ferrer was also struggling with his game and has been for a few months.  Ferrer was pushed to 3 sets by Jack Sock in the opening round, then again by Ernests Gulbis in the semifinals (he had a walkover over Verdasco in the quarters).  Ferrer actually won the opening set, 6-2, but Dimitrov came back 6-3 and 6-4 to take the match.

Dimitrov had been coached by Patrick Mouratoglou, who famously coaches Serena, but split up recently, and now works with Roger Rasheed, who used to coach Lleyton Hewitt, Gael Monfils, and most recently, Jo-Wilfried Tsonga.  Up til now, Dimitrov has looked talented but lacking a definitive strategy for winning.

Top-seeded Richard Gasquet met qualifier Mikhail Kukushkin.  Kukushkin had only one won career title back in St. Petersburg, and so clearly likes playing in Russia.  He was desperate to win this and looked like he might have a chance late in the third set up 4-3 trying to consolidate a break with Gasquet apparently injured.  In a marathon game where Gasquet had opportunities to break and Kukushkin had opportunities to hold, Gasquet ultimately broke, then held pretty easily, then broke again to take the title.

With the win, Gasquet moves ahead of Tsonga into the 9th slot which is the last one that qualifies for London (with Murray out for the rest of the year).  Only 30 points separate Gasquet from Wawrinka (who is in 7th) with Roger Federer in between.

There are two more weeks of tournaments (this week at Basel/Valencia and next week in Paris) before London.

In what had to be a nightmare for the chair umpire to call (since Haas and Haase have such close names), the veteran, Tommy Haas won his second Vienna title, his first having come back in 2001.