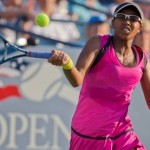 Seventeen-year-old Victoria Duval of the USA pulled the biggest upset of the US Open so far by defeating 2011 US Open champion, Samantha Stosur of Australia 5-7, 6-4, 6-4 in the opening round of the 2013 US Open.

After dropping the first set 5-7, Duval was able to overcome her young age and inexperience for the biggest win of her career closing out the final sets 6-4, 6-4. With Duval serving for the match up 5-4, Stosur fought off two match points before Duval closed it out with a forehand winner.

A partisan Flushing Meadows crowd rallied behind Duval, and the teen with a tiny voice thanked the patrons after the match — only further endearing herself to them.

She also tried — somewhat unsuccessfully — to explain what was going through her head when she was serving for the match. “I just tried to stay in the moment,” Duval told ESPN after the match, before adding, “I don’t know, I’m just really excited right now.”

It was her first ever Grand Slam victory, and what a big one it was.