Serve and Volley: The Split Step 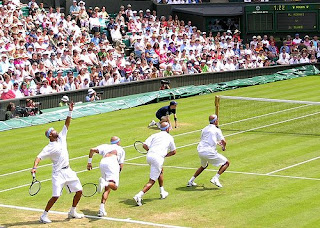 Welcome to the Essential Tennis Blog! Thanks so much for being a reader and dropping by today. Remember to check out the Essential Tennis Podcast as well for even more high quality tennis instruction to improve your game. Simply click the link on the right side of this page.

Today’s topic comes from Shawn. He recently wrote me a question about serving and volleying that said:

Clearly what I would like to do is “a” but be under control at the end. Should I be doing some extra footwork drills to improve my chance of gaining balance after a full sprint? Note that the kick serve is a conscience choice since I find that a fast flat serve comes back way too quickly to get anywhere close to the net.”

Shawn, thats a great question, well worded and thought out. Coming to the net immediately after a serve is a great way to mix things up in your singles play, and something that everybody should be doing most of the time in their doubles play. As you say, this skill is very difficult to become comfortable with for the first time. Once you start using a split step correctly though, things become much more manageable. A split step is part of good tennis footwork, and is used to prepare your body by putting yourself in a balanced position.

I will split up this article into the two main components of the split step: the timing, and the technique of a high quality split step. After reading it, make sure to get out and practice!

The split step is a purposeful “hop” or drop into a good, wide ready position. Here is an old photo of Roddick coming down into a ready position to prepare for a return of serve. You should hit the court with your balance on the inside edge of the balls of your feet, knees bent, feed wider than shoulder width, and weig 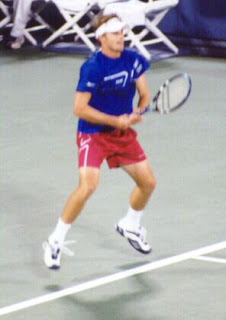 This is by far the most important part of the split step, and by far the least understood part of serving and volleying by intermediate level players. When you split step has nothing to do with where, and everything to do with when. Shawn the reason why you’re having to choose between balance and getting closer to the net is because you’re choosing different places on the court to make your split step, instead of timing it with your opponents swing. A correctly timed split step will have the balls of your feet touch down on the court at the same instant your opponent makes contact with their oncoming shot. If you time it too soon, you are wasting time that could be used to get closer to the net. If you time it too late, you won’t be in balance until the ball has already been struck by your opponent, which puts you closer to the net but with much less time to actually move to the ball. This means that you should begin your split step right before your opponent or partner makes contact, as they start to make their forward swing is a good time to start from. If your feet are landing first and then they’re hitting the ball you started too soon, if they hit the ball and then your feet land second, then you’re too late.

Readers, this is an art form and it will take you some practice to start timing perfectly. Don’t be discouraged if you don’t get it right away. Let me reiterate though that the timing is absolutely crucial. You want to get as close as possible to the net for your first volley or half volley, but getting close and running right past the ball obviously doesn’t do us any good, so we need to be in balance as well to move for the ball. At the top of the page is a great series of photos of James Blake serving and volleying. Notice that before making his split step he only gets in two steps. Being in balance is more important than being close! Just make sure you use all the time possible, because I do want you to get as close as possible. The final photo of him in that series shows him just coming down into his split step, It looks like he’s already started to identify that his first volley will be to the right and he’s leaning in that direction.

Thats all for today. Thanks so much for stopping by and take care.