In this four part email series I’m going to tell you exactly what to look for to make that a reality.

Part 1 of this series revealed the first “P”. If you missed it either scroll down in your inbox or check it out here.

Combine this tactical knowledge with the new plays Will Hamilton is releasing (Video 2 here) and your doubles game will reach the next level in no time.

Let’s dive right into the second P of Lob Reading:

A big part of that has to do with how much athletic balance they have in the last step or two before making their swing.

Aka “poise”. Let’s look a few real life examples, just like we did in Part 1: 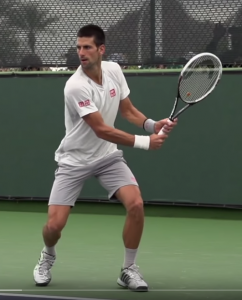 The above image is a perfect example of athletic poise.

His posture is upright…

His torso is perfectly positioned in the middle of his stance (between his two feet) giving him tremendous control over what he can do next.

Long story short he can comfortably hit any shot he wants without any stress or strain.

Contrast that image with this one taken from the same practice session: 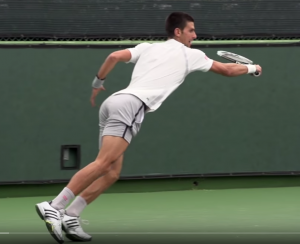 His posture is thrusting out towards the ball at 45 degrees…

His torso is miles away from the center of his feet which means he has no choice but to fall in the direction he’s already set his movement.

Novak’s shot options from this position are dramatically restricted because he simply doesn’t have the balance or stability to hit anything offensive.

Poise is a HUGE indicator of what shot your opponent will hit next!

To be clear, Novak didn’t do anything “wrong” in the second image. Being off balance is a natural occurrence in tennis after one player or the other hits a great shot.

Unfortunately most amateur players love to admire their great shots and pat themselves on the back instead of studying their opponents to anticipate what shot is coming next.

If you paid close attention to Part 1 of this series then you probably quickly identified some other key factors in the second image above related to “preparation” of the racquet.

Poise and preparation are often linked but not always!

We’ll talk more about that as this series continues but for now be sure to check out the second video in Will Hamilton’s new doubles series.

It features a practice drill and tactical play from the Bryan Brothers that allows you to win more points from the baseline position.

Check it out here:

I’ll be back with the other 2 P’s of Lob Reading soon.

Honestly, the ones we’ve already talked about (preparation and poise) are enough to start reading 50% of the lobs coming your way…

…but miss the others and you’ll keep getting burned after approaching the net!

More on the way soon. Thanks so much for reading 🙂