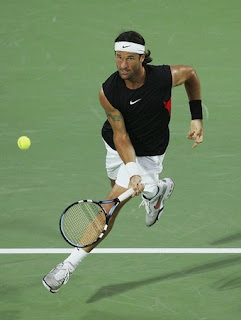 In my teaching of both singles and doubles players I encourage my students to come to the net a great deal. I love the net personally, but if approached incorrectly this strategic move can become much more difficult that you bargained for. I will split up this article into three main parts: when to approach, where to place your shot, and where to place yourself when approaching the net in singles. Enjoy!

This is crucial, and if you’re a singles player a good fundamental understanding of the right time to come in is the difference between winning and losing a point. When you come to the net, you take time away from your opponent. However, by placing yourself close to them, you also take time away from yourself. That means you cannot afford to come waltzing in on just any old shot or you’ll be a sitting duck. There are three main times that I encourage students to come on up to the net, they are:
a. After receiving a weak shot. If your opponent has had trouble with your previous shot and hit a weak reply, get in his or her face and follow the weak shot in! Generally most shots that bounce in front of the service line are considered “weak”, due to their lack of pace and depth, these shots will be easy to hit with an aggressive swing and followed in behind.
b. After hitting a challenging shot for your opponent. We’ll get into this more in depth later on in the article. If you’ve just completed a stroke that will be tough for your opponent to return, compound their worries by immediately following it in for the put away. This takes good anticipation and some knowledge of your opponents strengths and weaknesses.
c. You’re headed upwards anyway. Sometimes I’ll see students rush in for a short ball barely retrieving it, and then they will try to high tail it back to the baseline again before the next shot is hit to them. If you have lots of forwards momentum getting to a shot, go ahead and let it carry you up to the net. It will be less work than getting back to the baseline, and you will be pressuring your opponent. Just make sure you know where to hit your shot before you come in!

2. Where to place your shot

If you do not challenge your opponent on the way up to the net I guarantee you will not be as successful coming up. Since we’re playing singles, in general the best place to aim is down the line. The reason for this is based in geometry. Let’s say that you’re right handed and just got a short shot to your forehand side. Your opponent is waiting for your shot in the middle of his or her baseline. If you hit cross court the largest part of your court is immediately in front of them because you hit from your right side of the court and placed the ball to the left. You now have a long ways to go in a short amount of time to cover this. If you hit down the middle, your opponent has an equal chance of passing either way, and can probably choose his or her stronger stroke as well. If you hit down the line, you are now automatically much better set up to cover the passing shot because you hit the ball from the right side of the court, and kept it there. Immediately in front of your opponent is you at the net, and passing cross court leaves little room for error, because one step over to your left covers most of that shot.

Now, again this is in general the best place to aim your approach, but I can think of several reasons why you could go someplace else as well.
a. Your opponent has a substantially weaker shot on the other side. If cross court leads to a terrible backhand that they have a hard time hitting aggressively go ahead and pressure them by forcing them to attempt a passing shot with the inferior stroke.
b. You feel you can finish the point outright cross court. An approach shot is a set up shot, you shouldn’t usually be hitting for an outright winner unless it’s an exceptionally easy shot. If that shot does occur go ahead and put it away cross court since the net is lower and the court is longer. If it’s not very easy, better go down the line most of the time.
c. Your opponent is out of position. If your previous shot sent them stumbling into the corner down the line from you, then by all means hit a nice deep or angled shot the other away cross court.

3. Where to place yourself.

Regardless of where you place your approach you need to get yourself in the best possible spot to cover as much of the court as possible. I will quickly go over the depth and width at which you should be positioning yourself after hitting an approach shot.

Depth is easy: get as close as possible! Seriously, however much time you have between when you hit your approach and when your opponent hits their passing shot use it all to get as close as you can to the net. The closer you get the more of the court you will cover if they try to pass you. Now, I can hear half of you screaming from here “but they’ll lob me!”. This is where knowing your opponent is priceless. Some people you play will love to lob, and will be quite good at it. If that is the case then certainly don’t go rushing blindly in with that previous knowledge, hit your approach shot and come in a couple steps in front of the service line. If they do in fact lob turn to the side and set up for your overhead. If they don’t lob then get on your horse and close in as quickly as possible to take the volley as close as you can to the net. This will both cut off whatever angle they may have on the passing shot and also make your volley easier.

There you have it, the nuts and bolts of coming to the net in singles. If you keep coming to the net and getting passed, then the quality of your approach shots needs to improve. Focus on hitting keeper and with more pace to the corner you have chosen. If getting passed isn’t your problem but your opponents keep running down your volleys then your net game needs to improve. Once you get up there behind a solid approach shot the point should be over within one or two volleys or overheads.

Hopefully this was helpful! Comments or questions are always welcomed at ian@essentialtennis.com