Hustle: the “it factor” of tennis 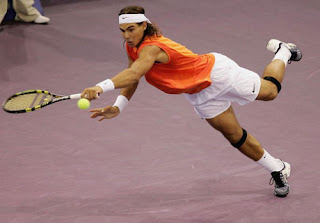 Hustle. There’s few things that will give you an advantage like hustle will. Today I’m going to go over my thoughts on giving all the effort you can every time you step onto a tennis court, and changing your mental thoughts about running for the ball.

Few things get to me more than a person who goes out onto a tennis court to play or practice, and watching them not try for a ball. I’m personally extremely competitive, so there’s a part of me that doesn’t even understand how somebody could just give up on a point or shot that they could have gotten to with just a few seconds of effort. There’s three main reasons why a player will not run for any particular shot, I will list them briefly below.

1. The player doesn’t think they can get to the ball. A shot is hit short, wide, or over a player and an immediate judgment is made that it’s out of reach and so its allowed to pass by completely unchallenged.

2. The player thinks the ball is going out. A shot is struck by a players opponent sailing deep or wide and the player stands and watches it land thinking the point will be over in his or her favor, only to be mistaken.

3. The player sees a shot hit some distance from them, and simply decides they don’t want to run for the ball.

All three of these reasons why somebody would not go for a shot are mental mistakes. If you know that you do any of them then you’re simply selling yourself short on the tennis court, and you can become a better player by banishing these thoughts from your mental vocabulary. It seems like such a simple thing to ask of a player: when you go to play tennis, run for the ball! However not everybody has the same amount of drive or desire, and so in my lessons I very often find myself in the position of motivational speaker trying to get my students to put out as much effort as possible.

Here are the three main reasons why I want you to run after EVERY ball:

1. You’ll get to shots that you never thought possible. I 100% guarantee you this, when you start running for every ball that’s hit to your side of the court it won’t take very long before you get to a shot that you wouldn’t have ever dreamed would be possible. Even if it’s only 4 or 6 extra balls that you get to per match compared to before trust me its worth it. Not only are you making your opponents work harder to try and beat you, but you can leave the court with the personal satisfaction of knowing you gave each and every point your best shot.

2. As you run and hustle for every ball, you will get faster! I 100% guarantee this to you as well. If you’re not already running for every ball hit on the court, when you begin to do it you will get physically faster. The reason for this is two fold. First of all, when you try for the really hard and difficult shots, you’ll simply get a better physical work out, your muscles will get stronger and more used to the higher level of effort. Secondly, over time you’ll get better at running full speed. Your coordination and quickness will improve as you practice going for every shot no matter how far away it is.

3. You will win more points, more games, and more matches. Few people realize how big of an effect their hustle has on their opponents. Thats right, how hard you try has a direct effect on your opponent as well. When they hit a great shot to a corner or short in the court that would usually not be returned and see you just bust it trying to run it down, even if you don’t get to the shot and make it they’ll know immediately that they’d better keep coming up with those great shots. As you continue hustling for their every ball, often times players will start making mistakes because they’ll try to make their shots better and better in response to you running them down. This puts pressure on your opponent, they can take no shot for granted once they realize you are going to put in 100% effort for each and every shot they hit. Not only are you going to win more points because you will start getting to and hitting more shots in the court, but you will win more points because of the pressure you put on your opponents to come up with a better shot to beat you with.

So let me encourage you, you can do this! As I said before, the main reasons why people don’t hustle are MENTAL ones. I don’t care how fast or slow you think you are, make a conscious decision right now that you WILL try for every shot hit to your side of the court. My coach in college would get absolutely livid when somebody would stand and watch a ball travel out by only a few inches. What if it was in? Run, get there, and be ready to return it in case it does land in. If it is in fact out, fine you still win the point, but you were ready to continue play just in case your judgment was a little off.

There are no subjective decisions when it comes to your point play. You will not stand and wonder to yourself “huh, that could be in, but I think its going out”. The only decision is an object one, you will run for every ball, no matter what. If you subscribe to this, your tennis game will improve.