In this post and tomorrow’s I’ll unpack the top 6 lessons I learned from my experience. Practical mindset, tactics, and strategy insights that you can implement in your very next doubles match!

First, a little bit of context:

The year before I had fought tooth and nail to walk on to my college team, the highlight of my competitive tennis career to that point.

I was playing the bottom of the lineup for my school (#6 singles and #3 doubles) so it was a shock when one day my coach informed me I’d be pairing with the best player on our squad to compete in the #1 doubles bracket for our NCAA regional tournament.

Turns out his normal partner (who had just transferred in from out of state) didn’t fill out all his paperwork correctly…so he was ineligible for competition his first semester.

Normally our top doubles team would be seeded #2 or #1 in this draw of 32 teams. Instead, with me in tow, our best player went into the tournament completely unseeded.

Needless to say nobody expected us to do very well, but thanks to my partner (Jason) I was completely in the zone. The result was four wins in a row, two of them against seeded teams, to make it to the finals of our regional tournament against the top school. 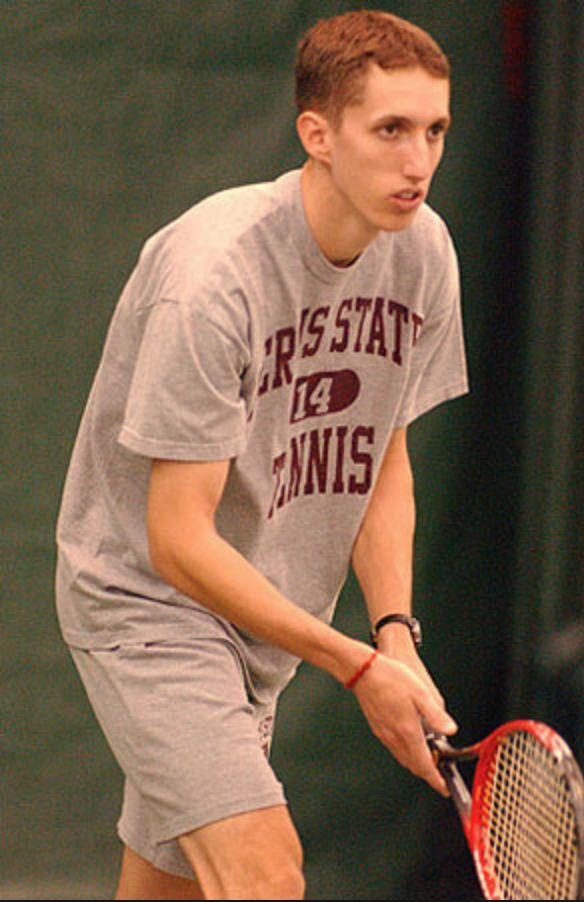 Here are the first three big doubles lessons I learned from Jason weekend:

This was the first and possibly most important lesson I learned. The first match or two I was frantically trying to keep up with the level of competition around me. I felt a tremendous amount of pressure to hit everything perfectly, hit winners, and generally close out points as quickly as possible.

Sure, I hit a few great shots, but Jason instantly sensed that I wasn’t going to be able to keep it up forever. Definitely not for multiple matches if we wanted to advance deep into the tournament.

He was right, so his mantra to me early on was “make them play….make them play…” especially in between points when I was getting ready to return serve.

Translation: “Give them chances to miss and ME chances to be involved in the point instead of trying to be perfect!”.

I’ll never forget the first time I calmed down and took a smooth, relaxed swing at a return of serve. The opposing net player made a move on it, cut it off at the net, and engaged Jason in a volley rally which Jason won.

Jason immediately turned around and praised me for simply making the return and getting us going in the point instead of trying to smash it down the alley or at the server’s feet as they were rushing in.

It was a huge “aha!” moment and to this day I repeat that phrase to myself over and over during matches.

This lesson isn’t for the faint of heart….you’re going to need some competitive grit to pull it off.

Every match has ups and downs, ebbs and flows, momentum shifts back and forth. If you can attune your attention to them then its possible to maximize the energy in your favor, or disrupt it away from your opponents.

The first time Jason showed me how to do this was immediately after breaking serve against one of our seeded opponents to go up 5-4.

We were playing 8 game pro-sets (one set, first team to 8 games wins the match) so a break of serve is HUGE.

We slapped hands and turned towards our side of the net for a changeover but as we neared our chairs and water Jason said under his breath: “keep walking….just KEEP WALKING.”

I was confused, but followed suit as he marched right past our stuff over to the other side of the court.

Our opponents watched as we set up our plan for the first point, took our spots on the court, and bounced back and forth on our toes. We were ready to go. No rest needed!

Being nice midwestern boys their water break was cut short as they hurried to wrap up and keep us from waiting.

We rolled through that service game at love putting pressure RIGHT back on their serve. They were fighting uphill big time.

Could our opponents have caught on to what we were doing and simply taken the full changeover time to relax?

Absolutely, but what we did would still send a strong message to them. It says “We’re in control, we’re confident, and we’re feeling good!”.

Either way we were consciously working to harness the momentum of the match and swing it as strongly as possible in our favor which can make all the difference in a tight match.

In most of our matches I was the weakest player on the court. No doubt about it.

That meant we had to maximize what we had by purposefully keeping our opponents off balance and confused. We had to get in their heads as early as possible and then keep leaning on them until they broke down.

The first way we did that was through a LOT of faking and poaching during our service games.

There was no “stay” signal or plan.

We were either faking or poaching, period. That kept our returning opponents constantly guessing about where was “safe” to hit right from the first swing of the point.

Against stronger opponent’s who weren’t easily fooled we quickly moved to using I formation, both as an occasional tactic to mix things up and as a sustained strategy against really good returners.

I frequently refer to I formation as “the Cadillac of doubles formations” because it gives you SO many options and variations to keep your opponents guessing.

Is the serve going to the T? Body? Out wide? Is the net player going to cut left? Right? Or pop up right in the middle of the court?

Your goal while serving in doubles should always be to make the returners as uncomfortable and uncertain as possible.

Unfortunately most doubles teams do the opposite: they leave a consistent, reliable lane open to hit to point after point allowing the returners to groove their shots.

I’ve had a ton of fun reflecting back on that weekend but we’re just getting started!

In the next post I’ll reveal the other three big lessons I learned from Jason, all of which you can put into action in your very next doubles match.

In the meantime, which of these first three insights was most helpful to you?