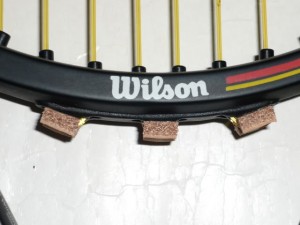 I recently felt like experimenting a little bit with my BLX 90’s so after researching some different ways in order to change this or that. I started reading about Power Pads, if you are not familiar with them. Simply stated they are little pieces of leather that are placed between the grommets at the throat area of your racquet (at the 6 o’clock position) and the string. They were mostly utilized during the era of the wooden racquets. Because of their construction the string used would often rub up against the frame and thusly snap. The power pads placed between the sharp wood angle of the hole would often help string vitality and also help to dampen the stringbed as well. But as the racquet and string technology has changed light years since that time, power pads has survived, albeit in a much more small pocketed world.

There have been pro players past and present that still use power pads. Sampras, Federer, Safin, and Haas to name a few. Now since racquets now days come with a slightly more round angle on the throat which eliminates the possibility of the string fraying, why do some pro’s and fewer recreational players still use them? 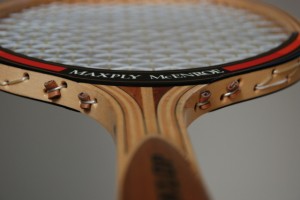 Power pads are much like any tennis equipment. There are myths and various opinions about the change these small square shaped cubes of leather offer their user. One thing is pretty much universally accepted that they do in fact dampen the feel without muting the sound, making the use of a vibration dampener null in void. That is of course that you do not like the “ping” sound strings can produce without a dampener. So if you are someone who doesn’t like to use the little graphic silicone squares, circles, etc or maybe you are someone who just cant seem to find one that wont pop out during hitting sessions or matches, then it’s possible adding power pads could be a good option. Another fact about power pads, is because of their addition they make the mains longer, and thusly creating a debate among the tennis players of the world. Because of the added length some people believe that the sweet spot increases in size (if only by a small amount), others disagree saying “you’d never be able to tell the difference.” 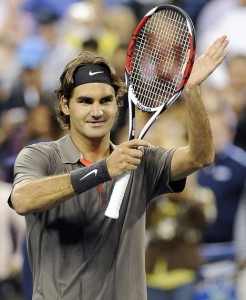 Regardless of the debate, there is another truth about power pads. They are cheap! You can make your own using old belts or even the scraps left over from a leather grip you took off or trimmed down. They’re also easy to install, whether you string yourself or get your racquets strung by someone else, you will have no problem installing them in.

So what I have I noticed about playing with them? Not a huge difference at all, but I do feel a more dampened feel for sure, and for me that means more comfort which is always a good thing. Do they add to the sweet spot? Well, I’d have to agree with the detractors on that one, because if it did then I certainly didn’t notice. But maybe, just maybe one day on one shot they will make the difference between a winner and an error and isn’t that all we can ask from a small piece of leather?