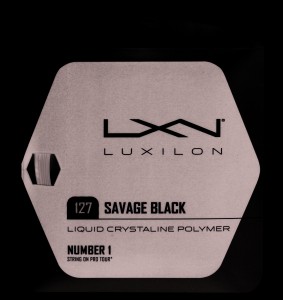 Luxilon is releasing a new string in January 2011. The new string is called Savage 1.27 and comes in three colors, Lime, Black, and White.

-Savage has a six-sided shape for extreme spin potential.

-Designed for players who want to hit hard, heavy shots.

I playtest a set of the Savage Lime, strung at my normal tension of 52 pounds in my Yonex RDIS  100 Mid-plus.  The string definitely has a crisper feel than my normal string which is Luxilon ALU Power. The liquid crystalline polymer gives the string a nice feel.  Great control with  a good feel  is a pretty good combination, and the little extra spin I got on the ball was a bonus. Savage also held tension as well as ALU Power, so there is tension loss but its gradual and not very noticable.  The ERT readings after stringing were in between ALU Power and Babolat’s RPM blast.  If your looking for something a little firmer than ALU Power, but not quite as firm as RPM Blast.  This is your string.  The six-sided shape definitely gives you the opportunity to generate more spin.  Poly lovers should give this one a try, it may be just what your looking for.