At the last minute I was asked to pair up with the best player on our team for the individual NCAA tournament, a huge jump from my normal spot of 6 singles and 3 doubles!

During that weekend I played absolutely out of my mind. Every match was a blur as my level of play raised to the occasion and my talented partner revealed keys to success that had never occurred to me before.

The first three keys were unveiled in yesterday’s post. If you haven’t already read them definitely do so by clicking here.

Let’s jump right into the second set of three, all of which you can implement in your very next doubles match!

Here’s a really easy way instantly tell if you’re watching an exceptional doubles competitor or an average one: watch their knee jerk response to an error from their partner.

Do they roll their eyes, complain, disengage emotionally, or coach?

OR do they instantly support, encourage, and connect in a positive way?

That’s just the first layer of great doubles partner management, but what most players miss is the next level deeper, the thing that my doubles partner (Jason) did so well during that tournament with me:

He supported me in the way that I most wanted and needed it.

It’s not just that he was supportive after my mistakes in general (which would be a huge improvement for most players) but that he also took the time and effort to get to know what I responded best to.

Some partners will appreciate a light hearted joke after blowing a big point. Others will hate it.

Some partners will like it if you’re high energy and full of hype. Others will find it incredibly annoying.

Some partners will crave your emotional support and connection between points. Others will find it distracting from the task at hand.

The bottom line: you have to become a sort of armchair psychologist out there.

Each and every partner will be different!

If you want to be exceptionally successful in your doubles matches then you need to meet your partners where they are and supply them with the support they need. NOT sit back and resentfully wish their personality better fit yours.

2. Keep the pressure on.

Want to win a doubles match when you and your partner are out classed?

You’ve got to find SOME way of applying pressure early and then figure out how to keep it on.

A big reason why Jason and I went all the way to the finals of this tournament, even though I was clearly the weakest player on the court in every match we played (just look at the picture down below, lol), is because we worked hard to smother our opponents point after point.

Had we given any of our opponents room to breathe, get comfortable, and find some rhythm then they all would have almost certainly figured out a way to exploit me and pick us apart.

Instead, we served and volleyed on EVERY serve, no matter how big of a pressure situation it was.

We either faked or poached on EVERY serve as well (much more on that in yesterday’s message).

Any time a return of serve made it past the opposing net player we were closing forward….

And once a rally got established we took every opportunity to inch toward the net as much as we could.

The bottom line: we wanted to be as close as possible to rush our opponents, hit down at them as often as we could, and force them to try and beat us while hitting UP.

Did it work every time? No way, not even close, but a great doubles team that commits to pressure understands they only need 51% of the points to win a match, and in some cases that’s exactly what we did.

This is absolutely the lowest hanging fruit for most of the tennis players reading this message.

It takes zero additional athleticism, doesn’t require great technique, and you can even completely mess it up but still come out ahead:

I’m talking about using signals in your doubles matches.

I know, I know….you and your partner always talk in between points to plan something out, right?

Great, excellent first step, but what happens when the first serve is missed?

I know it, you know it, and unfortunately your opponents all know it as well: the “plan” for second serves is to go right back to “normal” doubles.

AKA “you cover your side of the court, I’ll cover mine, and we’ll do our best to hit good shots”.

That’s simply NOT good enough if you want to continue beating better and better teams!

Yes, talk in between points, absolutely. But also be sure that you can be 100% on the same page if the first serve is missed, OR the returner changes up their position and you want to call an audible.

This is a huge reason why Jason and I won 4 matches in a row, none of which we were supposed to win. Every single point started out with a purpose and a plan.

Of course, things didn’t always go according to plan, and sometimes we had to improvise, but thanks to the signals we established before the match even started at least we could change things up on the fly before every single serve we hit.

It gave us incredible flexibility to change things up and also kept our opponents guessing point after point, whether it was a first OR second serve.

If you aren’t sure how to start with signals you can check out this quick video.

As I said in yesterday’s email Jason and I went into our 32 team draw completely unseeded and proceeded to win four matches straight (two against seeded teams) to make it to the finals.

Our last match was against the #1 seeded team. The winner would advance to the final 16 teams in the country to compete for a national championship.

Looking back now I’m proud to say Jason and I continued to do exactly what we had done to make it to that point in the tournament.

We were aggressive, supported each other unconditionally, and found a great balance between consistency and offense.

To everyone’s surprise (and especially mine, lol) we went toe to toe with them for the first 10 games, nobody breaking serve. It was an epic struggle for the net and trying to take control of the court.

At 5-6 and 30-30 on my serve I threw in a rare double fault, and on the next point they hit a great return and put away a volley for the break of serve.

The tournament format was a single 8 game pro set, which meant up 7-5 they had to hold serve one more time to take the match, and they did.

I was so focused and determined to figure out a way to win that I remember the final point ending and I didn’t realize the match was over until Jason came up to say “good match”.

Here’s a picture of the four of us afterward: 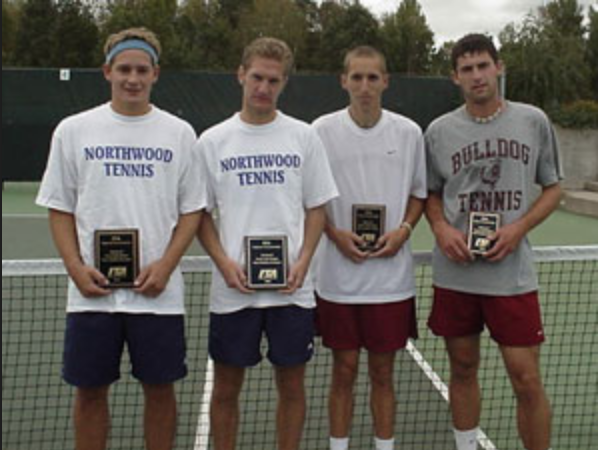 I’m not embarrassed to say that I’ve cried after several matches in my competitive career….and this was definitely one of them.

More than anything I think I was so disappointed that the experience was over, and I so badly wanted to go back and erase that double fault.

Now, looking back, I wouldn’t trade the tournament for anything.

I learned so much about doubles and myself, things that I’ve tried my best to communicate here so you can hopefully advance your game as well.

If so do me a favor and leave a comment below. I’d love to hear from you.

Thanks for reading and have a great day.